Skip to content
Also in this series: Long for Me (Luminous, #3)

Also by this author: His to Love (Fireside, #1)
Crave Me (Luminous, #2) by Stacey Lynn
ASIN: B01N5UOT2I
Published by Carina Press on May 29, 2017
Genres: Contemporary, Romance
Pages: 228
Buy on Amazon
Goodreads

Chloe
I know I shouldn't covet my sister's ex-boyfriend.

But he won't go near me. Not with the memory of her so close.

That leaves me no choice. If he won't touch me when he knows who I am, I'll have to come to him in disguise.

He's worth the risk. I'm meant to be his. Now I just have to prove it to him.

Simon
Being a Dominant cost me my first love, but I can't deny who I am. I won't. Control and power are everything, and the way I keep mine is by playing only with experienced subs. No exceptions.

Until I met her.

She wore a mask, but I knew the moment our lips touched she was meant to belong to me. Young, new to the world of BDSM—I knew training her would be a risk.

I didn't know it would destroy me.

While Crave Me is book 2 in the Luminous series, it can absolutely be read as a standalone. With that being said, I enjoyed the first book so I was exited to see where Stacey Lynn would take us with Simon and Chloe.

I won’t rehash the book. I think it takes away from some of the reader’s experiences and puts some unfair expectations before the first word is read. What I will tell you is that this book is HOT. Just like with the first book, the sexy times are smoking hot and will have you clenching your thighs. It’s highly recommended that you read this at home unless you enjoy discomfort in public. You know what I’m talking about. 🙂

I like that Simon isn’t your typical Dom that most write about. Sure, he is when it comes to playing the role but there isn’t some dark story behind his desires and he isn’t some billionaire. He’s a teacher and a hockey coach and that makes him way hotter in my opinion. More realistic and quite frankly a better fantasy! So many things you can go with.

I’ve always enjoyed Stacey Lynn’s writing. It flows easy and has the right descriptive balance that I look for. With Crave Me, she delivers us a smoking hot love story full of dominance, sass and whit. Pick it up, I think you might just like it. 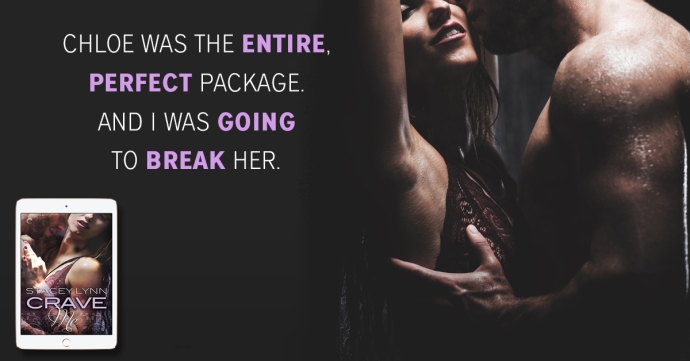