Check out this excerpt for Cards of Love: THE SUN by Stevie J. Cole! Don’t forget to add it to your TBR! 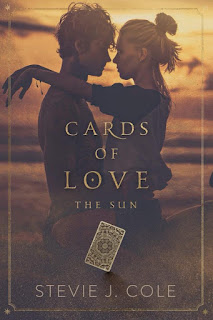 The cliche in love stories is that the good little rich girl falls for the poor bad boy with tattoos. The glamorous prom queen gets knocked-up by the swoon-worthy tattooed god who smells of leather and exhaust from his motorcycle.

That is not how this story goes.

Elias Black may have had a sleeve of tattoos and grown up on the wrong side of the tracks, but he didn’t have a true bad bone in his body.

Until he fell for me. Then he was terribly bad.

The single-note hum of the cicadas mixed with the gravel crunching beneath my feet in a weird southern symphony. The sliver of moon hung high in the sky, providing very little light. There’s something eerie about walking through an open field alone in the dark. Something that makes you feel incredibly vulnerable. My imagination ran wild, picturing a Michael Meyers-like figure stalking behind me, butcher knife raised and gleaming under the moonlight. By the time I reached the street I was almost in a jog.

I pressed the unlock button on my key fob and my headlights blinked. I was about three feet away from my car when Elias called my name. He held a burning cigarette to his lips, the glow from the cherry washed his face in a faint red light. He blew a stream of smoke through his lips, then tossed the cigarette onto the asphalt before stepping between me and my car.

“What are you doing?” I asked, my heart thumping swift and hard.

I stood there for a moment, watching him watch me. Wanting him to say something, anything that would make the desperate ache in my chest give up.

“You going home?” he asked, his words slurring just enough to tell me he was drunk.

My jaw tensed. I could have said yes and left it at that, but every time he ignored me, it physically hurt and for some dumb reason, knowing I couldn’t have Elias made the love I harbored toward him root more deeply in my soul. I dug my fist into my hip. “Not that it’s any of your business, but yes.”

He took a deep breath, interlocking his hands behind his head and curling his elbows in toward his face, his eyes closed. “I don’t like you kissing him.”

My heart skipped critical beats, but I somehow managed to hold my chin up and push my shoulders back like I couldn’t have cared less. “Well, that’s too bad.” I went to climb into the driver’s seat, but he grabbed my arm. “Let go, Elias.” Please don’t let go.

He inched closer to my face, the smell of cigarettes and beer heavy on his breath. “I said. Do you love him.”

One, two, three seconds ticked by, our gazes locked, our lips mere centimeters from one another. “What difference does it make?” I managed.

His warm, parted lips met mine and, suddenly, I was breathless. That kiss felt like being born and dying all at the same time. A supernova heating and growing brighter and brighter until finally its mass was too much for the meager universe and it exploded, sending tiny fragments of stars and suns and moons hurdling into outer space. His hands cupped my cheeks, tilting my head back until it hit the hood of my car. The kiss deepened while bits and pieces of our souls bled together. When his tongue brushed mine, I no longer knew who was breathing for who because there was no end to him or me. Just us. And when the kiss ended, it felt like my entire world collapsed a little.

His forehead pressed to mine. “God, I fucking miss you.” Every word filled with conviction, as though I were a priest and he were sinner. “Just give me tonight. Please?”

My fingers raked over his stubble and into his thick hair. I didn’t want to give him one night, I wanted to hand him every night I had left in my life, but sometimes we must settle. After all, we’re only supposed to live in the moment, and that moment right there, on the side of Highway 180, was one I hoped lasted forever.

Sign up for Stevie’s newsletter to get SPECIAL offers and FREEBIES: http://eepurl.com/cSvrXn

Stevie J. Cole lives deep in the woods of Alabama with her sexy hubs and two precious daughters. She has an obsession with penguins and English chocolate and is terrified of clowns.

Her solo books offer you all the feels you’ve come to love in a warm, pretty romance with happily ever afters, while her co-authored books with LP Lovell take you on a thrilling ride of suspense and danger with a nice little kick of love.