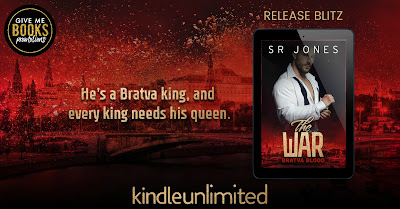 Title: The War
Series: Bratva Blood Duet #2
Author: SR Jones
Genre: Dark Mafia Romantic Suspense
Release Date: July 23, 2020
Blurb
Konstantin:
I took her to protect her. To keep her safe.
Now, she wants more.
She wants to claim my heart.
She says she will fight for me…for us.
Trouble is, I don’t know if I have anything left to give.
Cassie:
He took me to keep me safe.
My captor, my protector, my lover.
I want more, he’s a Bratva king, and every king needs his
queen.
My heart is on the line, but I won’t give up the fight.
Love is war when it comes to the two of us, and this is one
war I will win.
ADD TO GOODREADS

Excerpt
“Andrius
told me there’s no going back to normal for me now. That once you’ve been part
of something like what happened, you don’t ever go back to being the same.” I
tell Konstantin my deepest fear, which is that I’ll be tainted by this forever,
unable to move forward.

“No, you don’t. You can be normal again, though. You can go back to your
life. To your dance classes with your neighbor, and helping your grandparents,
and being generally kind and good. You had that walk on the wild side you
craved, and you didn’t enjoy it. Lesson learned.”

It’s not a lesson learned, though, because I can’t stop craving him.
He’s my walk on the wild side, and I don’t want it to end. I
tried to tell myself I did. Tried to convince myself I was done with him, but
he pulls me back in each time. Having him so close to me, holding me, is pure
torture.

I once thought he couldn’t be my shelter because he was the storm. Now I
wonder if he’s really the jagged rocks guarding the bay. I’m in the bay, right
in the eye of the storm, and it’s not me he’ll smash to bits, but anyone who
gets close or dares to harm me.

I turn in the water until I’m facing him and study his face. He’s not
classically handsome. His features are too hard, his body too big, his face too
arrogant. He’s beautiful to me, though. Truly, breathtakingly beautiful. From
the first moment I saw him, he stopped the clocks for me, and they haven’t
started since.

Reaching up, I trace the outline of his jaw with one wet finger. He doesn’t
move, but something subtle changes in him; he goes on alert. Like the predator
he is, he watches me, eerily still, waiting, seeing if I’ll go ahead and offer
myself up to him.

Hi guys.
I’m Skye, a paranormal and contemporary romance author from rainy Northern
England. I write Paranormal romance as Skye Jones, and steamy dark romance as
S.R. Jones.
The one thing my books in both genres have in common are gritty themes, and
alpha heroes who are damaged but oh-so-redeemable!
When I’m
not writing, I’m either walking my dogs, drinking coffee, or watching my fave
TV shows such as The Sopranos, McMafia, and Little House on the Prairie, yep I
have eclectic taste!
Author Links
AMAZON
FACEBOOK
WEBSITE
GOODREADS
INSTAGRAM
NEWSLETTER
PINTEREST